Ancient and Honorable Order of the Tankard

Awarded to Heads of State and the Nobility.

Order of the Goblet

Awarded to the Clergy, Officers, Diplomats, Scholars, Scientists, Artists, and persons of merit.

Military Order of the Golden Crown

Awarded to Generals for victory, gallantry, and heroic derring do on the field of battle.

Awarded to Reich Duke Wilhelm by the Empress herself

Order of the Lion

Order of the Grand Star 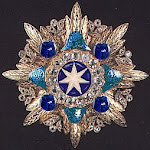 Awarded to Reich Duke Wilhelm from the Republic of Neues Sudland

Order of the Blue Bear

Awarded to Reich Duke Wilhelm by Herzog Fredrick of Harzburg

Order of the Golden Lion 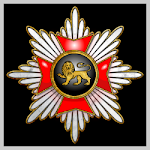 Awarded to Reich Duke Wilhelm by the Kingdom of Katzenstein

Order of the Black Pelican

Awarded to Reich Duke Wilhelm by the Kindom of Syldavia

Awarded by King Phillip I, The Holy Mormoan Kingdom of New Wales

Awarded to Reich Duke Wilhelm by Marquis of Vilana in 1713

The Sicilian Campaign renewed part I 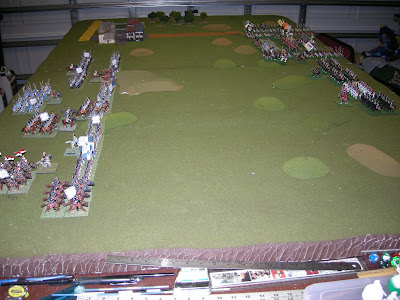 After reorganizing his army, Reich Duke Wilhelm advances on Naples. 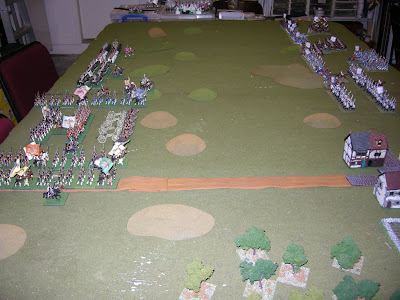 Reich Duke Wilhelm plans to attack Naples with the two infantry brigades on his right flank. 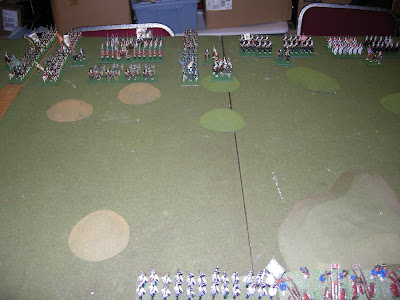 The cavalry on the west flank are to move further west to entend the Sicilian line. 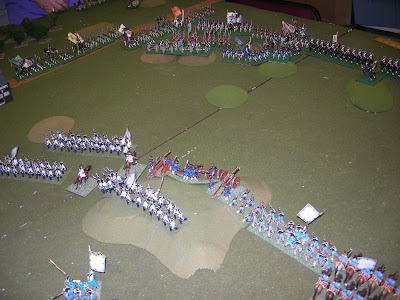 The plans seems to be working as the infantry are moving toward Naples unchallenged. 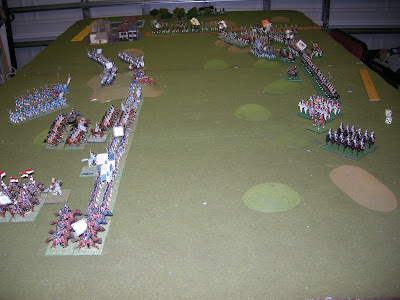 The Sicilian Infantry, which was held in reserve in the center, begins to react to the Beerstein advance on Naples. 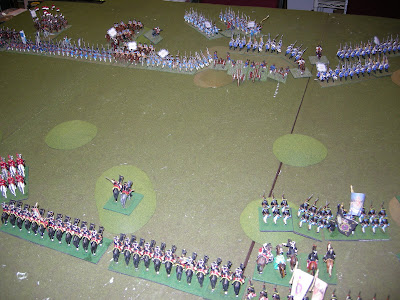 Reich Duke Wilhelm watches as the Sicilians advance on his left flank and move their reserve infantry toward Naples. He is confident his infantry will occupy Naples long before the Sicilians realize they have been out maneuvered. Further dispatches to follow.

Posted by Capt Bill at 7:16 PM 2 comments: Links to this post 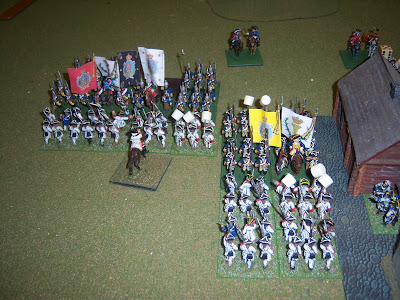 On the far right of the Hesse-Boozewick line their numbers are being to turn the battle in their favor. The Crown Royal Garde zu Fuss and the Glenlivet Fusiliers managed to double up on a hapless French Battalion and exact heavy casualties. Meanwhile the Meyers Musketeers reengaged the same French unit and forced them back an additional several hundred paces. 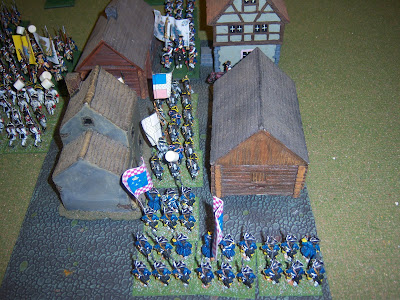 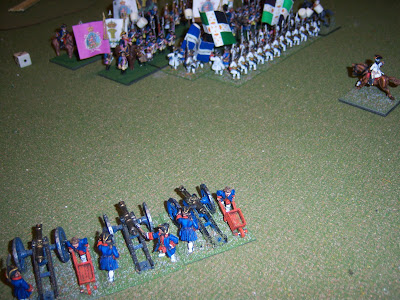 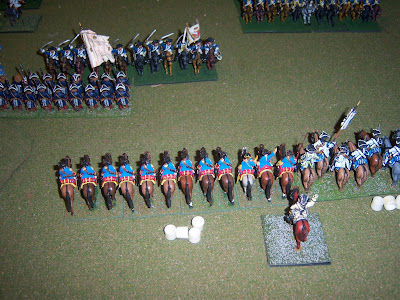 A view of the second round of the cavalry battle as seen from behind the French line. Despite the gallantry of the Hesse-Boozewick Dragoons, both regiments were pushed back and sought refuge behind their infantry. 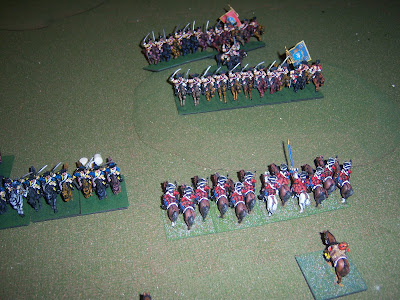 On the extreme right of the French line, the heavy brigade brace themselves for a charge of the Chivas Regal and Teacher's Cuirassiers. The Boozewick Cuirassiers quickly routed their French counterparts. 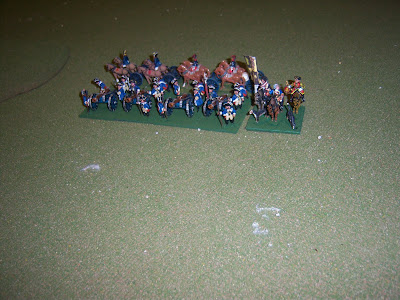 In the center of the battle line, the Boozewick Artillery begin to exact heavy punishment on the French Battery who were unable to defend themselves. 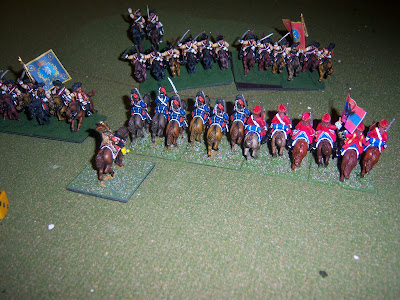 The Hesse-Boozewick Cuirassiers renew their attack on the French Heavy Cavalry and put them to flight again. 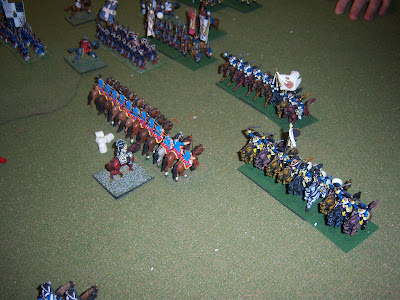 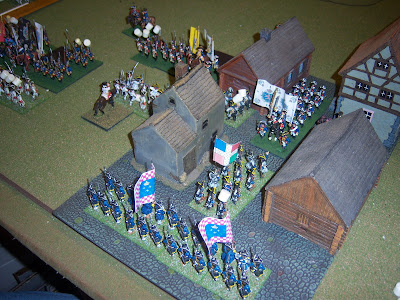 After a see-saw battle, Schenley's' Musketeers continued to hold their ground and push the French deeper into Alsfeld. The battle outside the village was a total Boozewick victory. The Crown Royal Garde zu Fuss overwhelmed and captured a French Battalion complete with it's flags. The French army sensing a complete rout began to retire from the field. Lord Calvert was content to hold the battlefield as his center was nearly broken by the continued vicious attacks of the French Infantry and artillery. All and all, a fine day's work!

Battle of Alsfeld part I: Duchy of Hesse-Boozewick vs the vile French 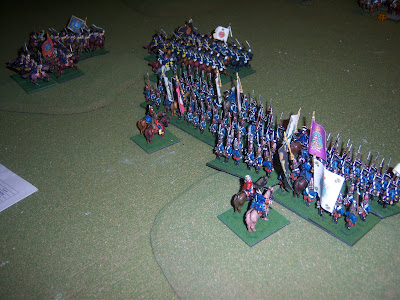 On the far left of the Hesse-Boozewick line Brigadier Graf Hiram Walker's Cuirassiers deploy. To their right is his his brothers infantry brigade. Brigadier Baron Johnny Walker "Black" leads the Seagrams Fusiliers and the Ballantine Musketeers. Brigadier Dunhill massed his brigade on a small hill facing the French center. His Glenfiddich Grenadiers and Murphy's Musketeers were merely to demonstrate and hold the French in place. 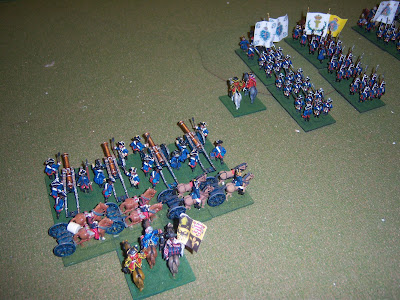 In the center of the Hesse-Boozewick line, Marshal Lord Calvert positioned the White Horse Battery. To the right of the battery, Brigadier Prince Jack Daniels brigade is formed up in column of attack. His orders were to attack the village of Alsfeld with the Schenley's Musketeers using the Meyers Musketeers as support. 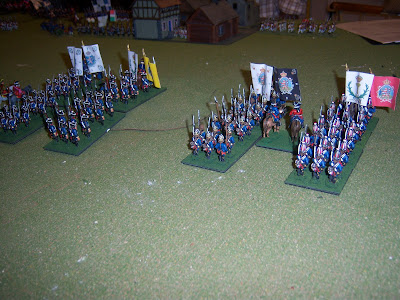 On the Hesse-Boozewick far right is Brigadier von Jameson's Glenlivet Fusiliers and the Crown Royal Garde zu Fuss. Jameson's Brigade was to maneuver to the right of Alsfeld and support the main attack. 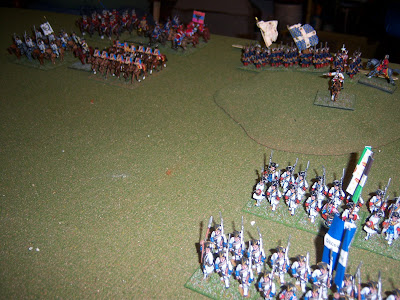 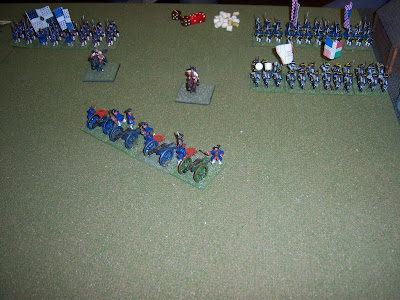 As the French Guard move into position, a heavy battery pivots to support the aggressive French advance in the center. Another French Infantry Brigade can be seen retiring from the Boozewick Artillery Battery attempting to form up on the out skirts of Alsfeld. 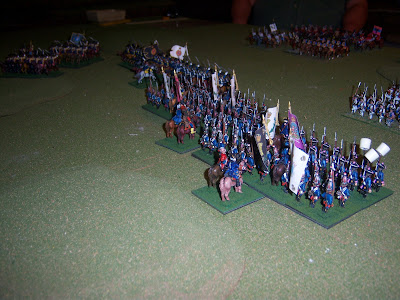 Brigadier Dunhill's Brigade has come under fire from the French battery as the French Infantry advance on his position. Brigadier Graf Jim Beam's Dragoons have moved up to fill the gap between the Hesse-Boozewick Infantry and their Cuirassiers. 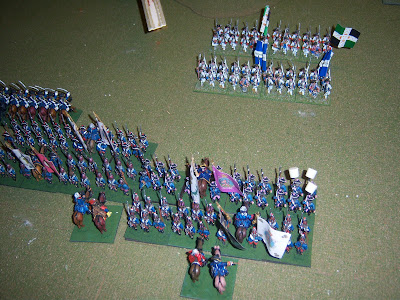 Brigade Dunhill watches as the French approach and begins to hope Baron Johnny Walker's Brigade will turn and flank the attacking French. 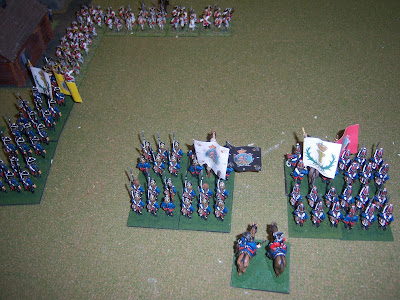 Meanwhile on the Hesse-Boozwick right, Prince Jack Daniels begins to double out his columns into line. The Meyers Musketeer, still in column, can be seen charging a French Infantry Battalion. 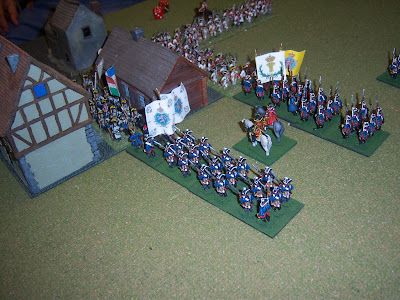 From another angle, the Schenley's Musketeers can be seen assaulting the village of Alsfeld. As fate would have it, both attacks were won by the Boozewickers forcing the French to retire several hundred paces. 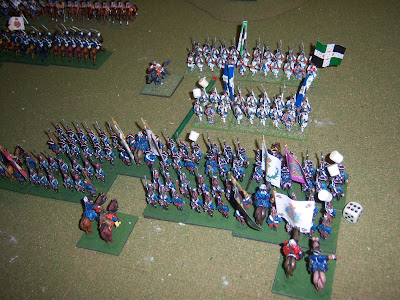 On the Hesse-Boozewick left, the Dragoons attacked the French cavalry and drove both regiments back several hundred paces. The French Infantry can be seen fast approaching Baron Walker's Brigade while the French Artillery continues pounding his exposed infantry. The battle report will continue is future dispatches.
Posted by Capt Bill at 8:32 PM 4 comments: Links to this post